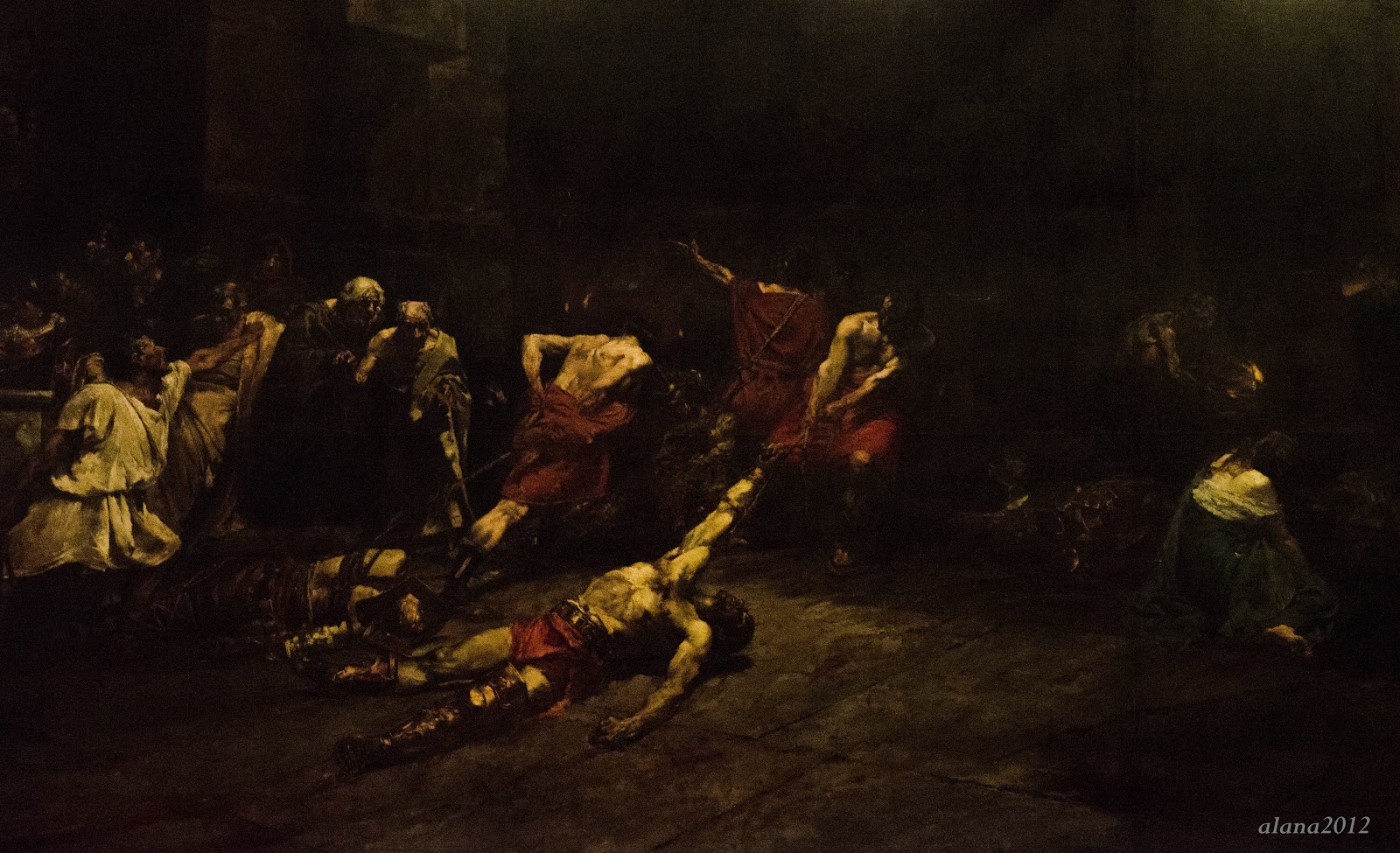 Conflict seeps into the lives and minds of who were born around it, including artists, and through prose, word, or paint one may reflect upon it, no matter the culture or era. Such artists whom pronounce their ideas of conflict, especially war, with immense strength are Filipino painter Juan Luna and Spanish artist Francisco De Goya. Their artworks give insight to the horrors and rebellion within war and oppression, as well as conceal its deeper meanings under the pretense of classical themes and constructed characters. Famous paintings such as Spoliarium (circa 1884), oil on poplar by Luna and Third Of May 1808 (circa 1814), oil on canvas by Goya serve as visual embodiments of how Francisco and Juan perceived the conflict surrounding them, having lived at approximately the same era, in two countries with a huge relationship at that time.

‘The tumult of the crowd, the shouts of slaves, the metallic clatter of dead men’s armor, the sobs of orphans, the murmured prayers..’, as described by Philippine national hero Jose Rizal, can be literally seen within Juan Luna’s Spoliarium. The painting depicts dying gladiators, slaves forced to fight each other, being dragged away during their final breaths after serving for the entertainment of their Roman owners and oppressors. Their masters watch the spectacle, while a wild crowd, mixed with ecstatic cheer and grieving of loved ones share the scene. A painting of a Romantic style, Spoliarium utilizes contrast and the balance of dark and light to invoke focus upon the form of the gladiators, painted with light colours, instead of their oppressors, shown partially in the shadows or in black clothing.

The emphasis on the dying slaves is obvious, despite the blurry texture and barely defined lines achieved through short, sharp brushstrokes. This is a technique common to the usage of oil-based paint, which was a favourite of Luna’s. Spoliarium measures at about 400cm by 700cm, enough to cover a whole wall of the large main gallery room of the National Museum Of The Philippines, with the individuals in the painting a little larger in scale than of the average human.

With its large size and amazing aesthetics, from the moment it was finished, Spoliarium became a hit among Filipinos, and even more so of their Spanish colonizers whom were also considered their slave-drivers during the 1800s. After claiming Philippines as merely another Spanish territory, the Spaniards ruled with an iron fist over the land, they deigned the native Filipinos as ‘indios’, natives and barbarians, and dictated themselves the wealthy and civilised. This continued on for 300 years, starting from the 1500s. Spoliarium became Juan’s medium of expression in relation to the oppression and conflict he and his people had suffered under the Spanish, illustrating the ‘indios’ as no more than mere slaves, whose lives were treated as lowly toys by the Spaniards, whom represented their Roman masters. With the brightness in the painting concentrated on the slaves, Luna highlights the innocence and heroism of the Filipinos. Furthermore, in irony, the painting also earned the praise of the Spanish authorities, as Spoliarium was awarded a gold medal in the Exposición Nacional de Bellas Artes in 1884 and bought by the Barcelona Provincial Council in 1886 for a large sum of money.

Another painting that made its mark in Spain at that time was Third Of May 1808 (1814) by Francisco Goya. This artwork depicts a group of unarmed Spanish captives cornered at gunpoint by a French firing squad, some already executed and bleeding on the ground while a mere tanned peasant kneels on floor holding his arms out as if in defiance and martyrdom. Another group of captives stand by the side, consisting mostly of monks or friars. Like Spoliarium, The Third Of May 1808 was also painted in a Romantic fashion, a similarity that both Luna and Goya share in style. The oil-based paint used in brief strokes make the texture of the artwork generally soft and undefined, with a nearly unapparent sense of outline. This artwork emits an atmosphere of terror and helplessness, with the solitary light in the scene sourcing from a box lamp that shining on the captives’ frightened faces and the dead forms. Contrast is also evident as shadows and dimness wash over the figures of the soldiers, while the lamp light concentrates on ‘showing’ the desperate captives in a balance of dark and light colours.

With illumination resting upon the Spanish, Goya depicts them as the oppressed and the French the cruel attackers that feel no mercy. At that moment in history, while the Spanish conquered and reigned over other countries such as the Philippines, their forces at home were weakening, accompanied with an exiled king and were left vulnerable for invasion by Napoleon. The Spaniards had become nearly defenseless in their own land, and Goya felt the pain of his people, expressing his thoughts on how the invasion and war had injured them by painting the Third of May 1808. Francisco reveals how evil the French were in his eyes by having the troops organised in a line in dark shadows and their rifles perfectly in sync, faces hidden – like monsters without identities or humanity. Deliberately painting the Spanish people in the form of common citizens such as meagrely dressed friars and a tanned labourer, he presents them as helpless folk that had no defences to the onslaught of attacks. Furthermore, a closer look upon the kneeling peasant exposes the stigma on his right palm, in the form of a scar similar to Christ’s when he was nailed to the cross. As Jesus Christ was known as a heroic or saviour figure, Goya uses this symbol to emphasise the labourer’s martyrdom and bravery, which may represent Spain as a country. This is what Francisco would have thought of his homeland. A land of pride and prosperity, maimed by the royal family and taken advantage of by heartless invaders.

Francisco Goya and Juan Luna experienced the conflict of war and saw the oppression of their people surrounding them, thus their inspiration for Spoliarium and Third Of May 1808. Juan expressed his view on the conflict and oppression of the Filipinos under the Spanish rule through Spoliarium, he saw his people as slaves whom could be controlled for the amusement of their masters, and that was what the artwork showed as its representation- slain Roman slaves being dragged from the coliseum after entertaining their Roman owners. Luna thought of conflict as something that could result in one force winning over the other and the enslavement of the weaker, leading to injustice and a thirst for freedom. This thirst had sparked the Philippine revolution, of which the leaders included national hero Rizal and Juan, whom became well-respected in their communities. Set within the same century but in a different country, Goya’s The Third Of May 1808 also reveals of his reflections about conflict, while the Spanish in the Philippines ruled, the rest back home were facing their own struggles and oppression from Napoleon’s French army. Francisco perceived his citizens as the defenseless victims in a greedy invasion of the French, whom to him were no better than beasts. From that view, Goya illustrated the Spanish people as the most common and honest folk- like farmers, peasants and friars being executed and cornered by faceless, uniform French troops shrouded in darkness and corruption. Additionally, Francisco also thought of the Spanish people in general as noble and willing to sacrifice for the wellbeing of others, asserting this particular belief by painting the labourer’s hand with a stigma relating to Jesus Christ’s crucifixion. Goya’s perspective of conflict and war is very much the same as Luna’s, he thought that there was injustice in one force assaulting another so severely, and deeply disapproved of the killing of vulnerable innocents because the invaders simply had the power. This he emphasised by painting the dead Spanish in the artwork in such a gruesome and bloody manner.

Conflict and war had plenty of disastrous consequences, such as unnecessary bloodshed, pain and suffering- this Juan and Francisco understood clearly, and at the same time, they wished to convey this understanding to the public either as an inspirational message to invoke a battle for freedom, or as proof that an invasion does not bring any blessing. Whether describing it with gory scenes or with ancient symbolism, Luna and Goya invite viewers to take a closer look at the effects of warfare and to contemplate thoughtfully on what can really be earned from it and what is really worth earning- money, materials, or lives. For people to be able to look closely, they had also painted their work in such large scale, another element that would attract more audiences. Without using guns, knives or swords, both these artists used a greater mental weapon, art- mere paint, paper, canvas, brush and creativity- to influence the minds of the people to bring a stop to war and the physical and emotional damage the conflicts in it brings.